One person has died with four others injured in a bloody clash involving galamseyers at Bonsa in the Tarkwa Nsuaem Municipality of the Western Region.

Four persons have also been arrested in the incident which occurred at about 4:00 pm Wednesday.

The Divisional Police Commander, Chief Superintendent George Andrews Kuma, who confirmed the incident, said the groups were returning from the mining site.

“The altercation occurred at the Bonsa tollbooth. The police rushed to the scene following a distress call but did not meet them except for one who was in a critical condition.

“He died on the way while we were rushing him to the hospital for treatment. He has been identified as Alhassan aka Alla who is a leader of one of the factions,” he confirmed on Adom FM’s Midday News Kasiebo is Tasty.

Chief Supt Kuma explained another leader, Apakaloo, was also slashed in the head and has been referred to Korle Bu for treatment.

Three, he noted, were also transferred from the Pentecost clinic to the Municipal hospital.

Meanwhile, four others are in police custody assisting with investigations to unravel the root cause and also to arrest of the ring leaders. 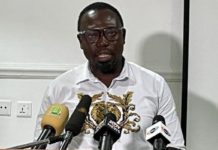 10 arrested in connection with bloody clash between Tarkwa ‘galamsey’ groups