Member of Parliament for North Tongu constituency, Samuel Okudzeto Ablakwa has offered a GHC¢10,000 bounty on the killers of Samuel Nyamador, the businessman allegedly murdered by unknown assailants at Juapong in the Volta region.

According to the former Deputy Education Minister, any reliable information leading to the arrest of the culprits of the said crimes will be rewarded.

“I have just spoken to the Volta Regional Police Commander and the Juapong Police Commander to inform them of my decision to make available a personal donation of GH¢10,000 as a bounty for anyone with information that leads to the arrest fiendish killers of Sonny”, the opposition MP wrote on Facebook.

Mr. Ablakwa had expressed disgust at the trend of violent attacks in parts of the Volta Region and has appealed to the police to speed up investigations to ensure that the perpetrators of this dastardly crime are brought to justice.

“Sonny was a respected shop owner who was very enterprising and well-liked”, Mr. Ablakwa wrote on Facebook, after commiserating with the grief-stricken family on Tuesday, August 11.

There is a serious manhunt for three persons in connection with the incident, police in the Volta Region said on Thursday.

Nyamador was shot dead while on his way home from work on Tuesday night in the company of his wife.

Three men are said to have confronted the couple and shot the man, according to local media reports.

On Wednesday morning, youth in the area massed up in protest of what they described as the late response by the police to many distress calls after the incident occurred.

Calm has returned to the area as police caution residents against such hasty demonstrations and called for voluntary information that may help bring the perpetrators to book.

“We have commenced investigations into the incident. I remember very well, the incident that happened at Sogakope. Up until now, we have not seen anyone coming forward that he or she was the one who made the call to the police”, the CNR quoted a spokesperson for the Volta Regional Command, Corporal Prince Dogbatse as saying.

“But if this becomes the basis of agitations, demonstrations, roadblocks, hampering of the movement of other road users, this is not justifiable. So our resolve is to play up to our mandate and bring the perpetrators of this crime to book. This is our assurance,” he noted.

I have a mind of my own – Ablakwa fires Kwamena Ahwoi 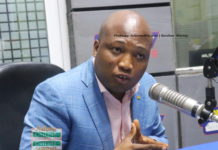