He disclosed that, he was still a virgin at age 19 when he got an opportunity to play football in Germany.

“I was a virgin at 19 when I left for Germany. I’m not a good man because I have done a lot”, he jokingly in an interview on Accra-based Starr FM.

The former Black Stars captain who is also a father of seven said he broke his virginity before his first marriage.

However, CK Akonnor said marriage is not for him after going through two breakups.

“I’m a divorcee and I was married for eight years. I have seven kids with two women. There’s someone in my life now. Time will tell if I will get married again” he stated.

CK Akonnor said given his experience with women, most of the players come to him for advice on relationship issues. 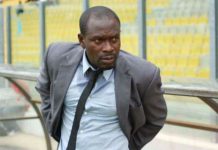 Kotoko’s job the most difficult in my coaching career – C.K. Akunnor

Police arrest 2 over missing body of chief at Awutu [Audio]