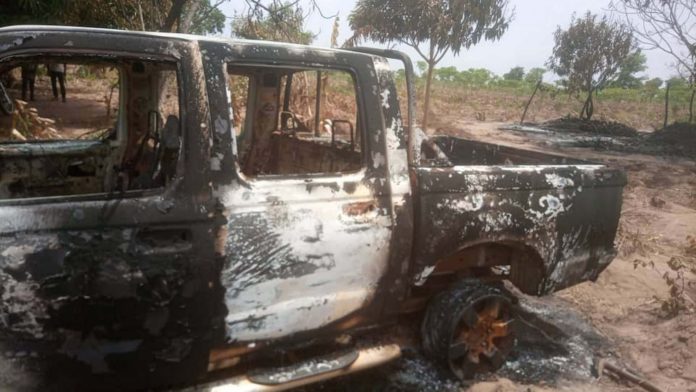 Nkwanta North District Assembly pick-up with registration number GT-2071-16 has been burnt into ashes in a farm close to the district assembly.

The District Finance Officer (DFO), Torfitor Philip, and his team last used the pick-up for revenue mobilisation on Tuesday which was Kpassa market day.

According to sources, the DFO reported that he got home in the evening and decided to drive with the pick-up to inspect encroachment on portions of the assembly’s land.

He said while tracing a path leading to the end of the assembly’s land, he noticed the pick-up in flames.

The source added that all efforts made to put out the fire failed and before their very eyes, the car got burnt beyond recognition within seconds.

The matter has since been reported to police for investigation.

All efforts made to speak to the District Chief Executive and District Director on the matter failed.

However, speaking to some farmers, they described the situation as a bad one.
They are, therefore, calling on the police to do a proper investigation into the matter to bring closure to the case.