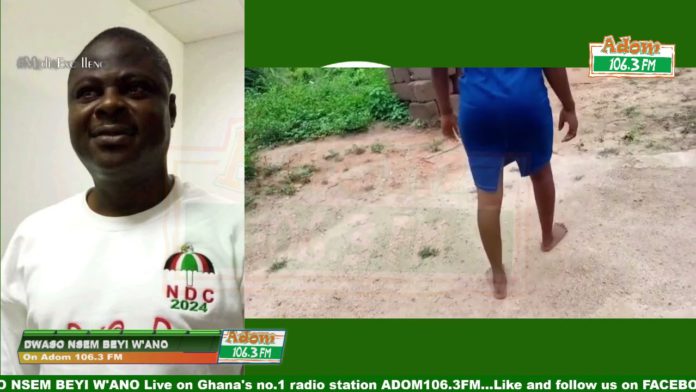 Margaret Arthur, ‘the mother-in-law’ of Kwasi Dawood, a National Democratic Congress (NDC) leading member, who has been accused of alleged incest with his biological daughter, has made some shocking revelations.

The illicit act is said to have resulted in a pregnancy that was aborted.

Contrary to Mr Dawood’s claims that he is not the father of the victim and had never been involved with the victim’s mother, Madam Arthur has revealed otherwise.

So far as she is concerned, the 18-year-old victim is Mr Dawood’s daughter as that was the first name her daughter [Mavis Ayitey] mentioned after they found out she was pregnant and queried her.

“My daughter, Mavis was about 15 and in Senior High School (SHS) one at Swedru Secondary when Dawood impregnated her but he was afraid to accept responsibility since he was also a student at the time,” she disclosed on Adom FM’s Dwaso Nsem show, Tuesday.

According to Madam Arthur, it took the intervention of the pastor of the Presby Church both Dawood and Mavis attend for him to accept responsibility.

This she narrated followed summons by the clergyman who took a special interest in the case for it to be resolved amicably.

“The pastor invited us to his office for us to discuss the way forward during which Dawood and his family assured us they will cater for the baby but they never showed up at our house until one Saturday after her birth.

“We were supposed to outdoor the baby the next day which was a Sunday so they brought two bars of soap and two pieces of cloth with the assurance that they will come the next day,” she added.

In high hopes, elated Madam Arthur stated she went round to invite family and friends for the ceremony the next day but her hopes were dashed after Mr Dawood and family refused to show up until six months later.

Following the incident, Madam Arthur said her daughter was pained and hurt, especially because she felt she has disappointed and let down her family as a student.

In the sixth month when he appeared, Madam Arthur, who has been the one fending for her daughter and grandchild, said Mavis became agitated and poured her a bucket of water on Mr Dawood.

“The situation was so bad that I had to ask Dawood to leave the house and handed him a towel to clean himself as I escort him to go and board a car,” she stated.

Fast forward, the granny said Mr Dawood returned for the custody of the child and that was when they reunited and the victim moved in with him, leading to the alleged unfortunate incident.

She explained her grandchild never at any point disclosed what she was going through but instead, confided in one teacher Bismarck at Swedru SHS where she schools and was later invited.