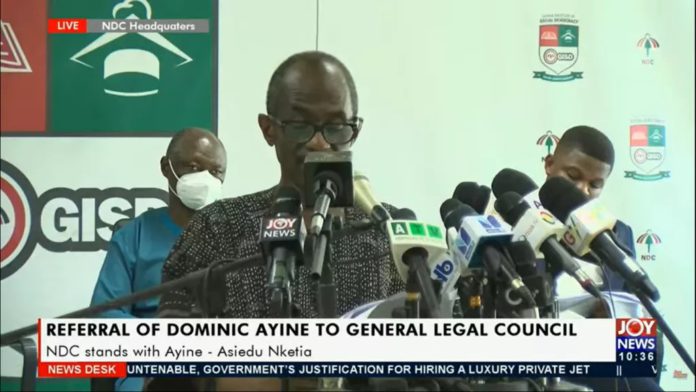 The National Democratic Congress (NDC) has called on the Chief Justice, Kwasi Anin-Yeboah, to withdraw his petition against Dr Dominic Ayine to the General Legal Council (GLC).

Justice Anin-Yeboah has petitioned the GLC to investigate and apply necessary sanctions against Dr Ayine, who is the Member of Parliament (MP) for Bolgatanga over comments he allegedly made against the Supreme Court.

Dr Ayine, who is also a former Deputy Attorney General, is said to have questioned the independence of the Judiciary.

He made the comments in May during a discussion on Presidential Election Petitions and their impact on Africa’s Democracy, organised by the Centre for Democratic Development, Ghana.

But the General Secretary of the NDC, Johnson Asiedu Nketia, addressing a press conference on Monday, accused Justice Anin-Yeboah of intimidation.

To him, the petition is a deliberate attempt to silence the legal brains of the NDC as it follows a similar action against South Dayi MP, Rockson-Nelson Dafeamekpor.

“Even as the action taken against Dr Ayine is unjustified, it is but a symptom of a larger problem. It is no coincidence that virtually all the lawyers who have been reported to the Disciplinary Committee of the General Legal Council by the Chief Justice, Justice Kwasi Anin-Yeboah, in recent times are aligned to the NDC,” he said.

General Mosquito, who maintained they stand with Dr Ayine, said that such a treatment would not be meted out to lawyers who are aligned to the New Patriotic Party for reasons best known to the Chief Justice.

“What is the Chief Justice’s personal interest in the punishment of NDC affiliated lawyers that he is so keen to initiate unwarranted actions against them?” he queried.