The Minority in Parliament has distanced itself from public comments by Deputy Whip and Banda MP, Ahmed Ibrahim, which seeks to endorse the candidature of Johnson Asiedu Nketia for the National Democratic Congress (NDC) Chairmanship position.

The NDC Chief Scribe, Tuesday officially launched his campaign in his bid to unseat the incumbent Chairman, Samuel Ofosu-Ampofo on December 17, 2022.

Speaking at the event which had scores of party bigwigs in attendance, Mr Ibrahim who spoke on behalf of the Minority Leader, Haruna Iddrisu, said General Mosquito, as he is affectionately called, is the best choice to fearlessly lead the party to power.

“We give you our unflinching support. We are not just supporting you. We will do the work with you,” he declared.

But a statement signed by Mr Iddrisu says the Caucus has not met or taken any such a decision.

The Caucus also noted that its leadership has no position on any of the candidates vying for the respective positions in the party.

“We, accordingly, urge our rank and file and the public to disregard the purported statement made during the launch,” the statement noted.

NDC Chairmanship race: Why NPP is campaigning against me – Asiedu Nketia [Audio] 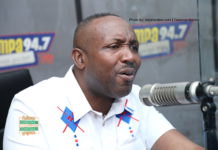