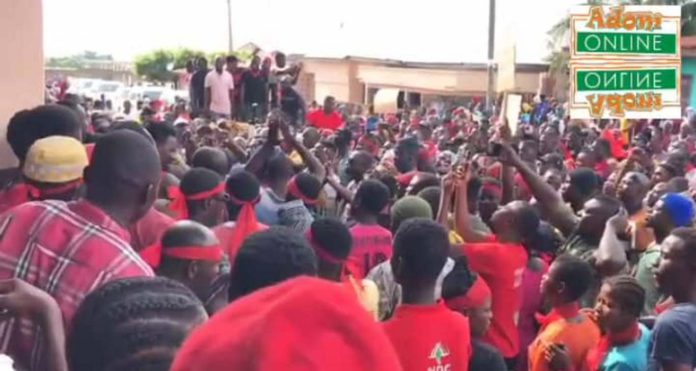 Some bigwigs of the National Democratic Congress (NDC) and supporters on Friday, December 11, 2020, painted the streets of Techiman South in the Bono East Region red.

This was to protest infractions and mayhem that marred the just ended December 7, 2020, general election on Monday.

Others were the National Organiser, Joshua Akamba, lawyer Victor Adawudu and Collins Dawuda.

They were clad in red and black outfits and welded placards with various inscriptions some of which read; We need justice, we don’t want political violence.

They also paid a courtesy call on Nananom and the chiefs of the Techiman Traditional Area.

Three persons sustained gunshot wounds and died in a shooting incident at the Techiman South constituency in the Bono East Region.

The confusion was said to have erupted when supporters of the NDC prevented the Presiding Officer from declaring the New Patriotic Party parliamentary candidate, Martin Adjei-Mensah Korsah, winner.

The EC Chairperson, who is also the Returning Officer of the 2020 presidential election, on Wednesday declared President Nana Akufo-Addo as the winner without results from Techiman South.

This is because she said the results for the constituency was outstanding as it was being contested, statements the NDC has dismissed claiming it won the seat.