In the video, Mr Bediako, speaking at a function, touted the benefits the district had derived from illegal mining.

He vehemently expressed his disagreement against the decision by the President to clamp down on illegal mining. 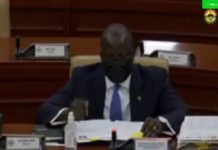 Abu Jinapor reveals Akufo-Addo’s instructions to him on ‘galamsey’