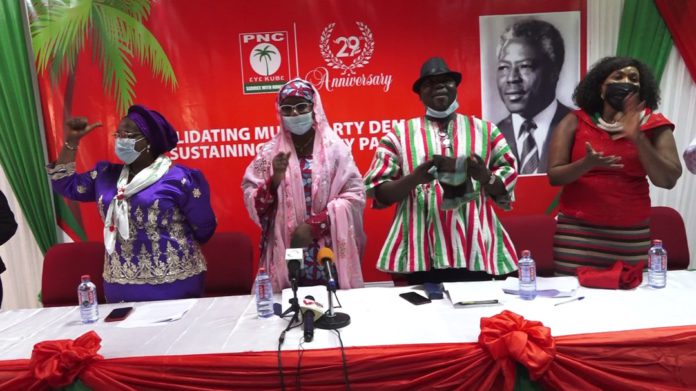 Minority political parties are singing with a single voice and calling for unity to break the duopoly of the New Patriotic Party (NPP) and National Democratic Congress (NDC) in the country.

At the 29th anniversary celebration of the People’s National Convention (PNC) on the theme ‘Consolidating Multi-Party Democracy, Sustaining Minority Parties,’ the Great Consolidated Popular Party (GCPP), Progressive People’s Party (PPP) and Convention People’s Party (CPP) charged themselves to stop paying lip-service to ensure that all Nkrumahists parties come together to form a strong third force to take over the affairs of the country.

The General Secretary of the GCPP bemoaned how personal and parochial interests of individuals have prevented the coming together of all Nkrumahists to form a formidable alternative to Ghanaians.

He opined that persons leading the various parties want to see their faces on the ballot papers during the general election.

Adding to the clarion call, the PPP Representative urged colleagues to put personal interests aside and ensure they come together.

She reiterated PPP’s readiness to making the Nkrumahists parties, one big family.

The chairperson and leader of the CPP, Nana Akosua Frimpomaa Sarpong-Kumankumah, said the new leadership is working to ensure that it reorganises all the parties that believe in the ideologies of Nkrumah and draw a roadmap to ensure that they come together to take affairs from NPP and NDC.

Meanwhile, the General Secretary of PNC, Janet Nabila, said the contributions of the party to national development cannot be underestimated.

She attributed the country’s under-development to the overthrow of Dr Hilla Liman’s government.

She added that most social intervention programmes such as National Health Insurance, School Feeding Programme, GETFund among others being implemented are the brainchild of the PNC.