According to her, whatever affects Shatta, her baby daddy, affects her and their son, Majesty, hence her appeal.

“I will appeal to all Ghanaians to offer powerful prayers for Shatta Wale so that what is happening will not trigger more serious issues because if he is in trouble, it affects me and my child too,” she begged on Accra-based Movement TV.

Michy’s appeal comes a few days after Shatta Wale disclosed he is now ready to confess to the world his former manager, Bulldog now Bullgod, allegedly told him about the death of rapper Kwaw Kese’s late manager Fennec Okyere.

Mr Okyere was killed at his Manet Gardens residence in March 2014 and at the time, Bulldog was named the prime suspect in the case.

He was picked up by the Criminal Investigations Department in April for investigations as he was alleged to have threatened to kill Fennec.

But in January 2018 an Accra Central District Court set Bulldog free and cleared him of all murder charges. Kwaw Kese registered he wasn’t happy about the judgement.

But Shatta Wale on Wednesday indicated he has information that will put Bulldog, born Lawrence Asiamah Hanson, into a tight corner.

The Police, following the allegation, said they have contacted Shatta Wale and he is cooperating with investigations. 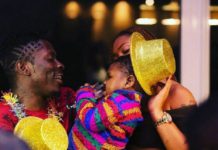