Traders in Tema are calling on security agencies to protect their shops from the rampant fire outbreak in the country.

In an interview on Adom News, some of the market women fear they might lose their source of livelihood police is not deployed to the area.

Their plea comes after traders in major markets in Accra like Kantamanto and Kaneshie lost their wares in fire outbreaks.

Though government has promised them some seed capital, the traders said their wares would have been safe if the markets were protected.

Chairman for Tema Metro market, Akwesi Agyemang said their plea is premised of activities of hoodlums in the area.

He claimed they had to chase out some unscrupulous strangers from the market during one of their night patrol.

As a immediate measure, Mr Agyemang said they have intensified the night patrol duties to avert any incident.

He also called on government to provide electricity and also deploy police to protect the market. 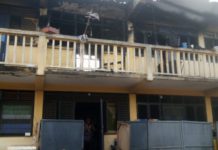