A man, believed to be in his late 20s, has reportedly been shot dead by unknown assailants at Kintampo in the Bono East region.

Reports indicate the deceased, who is a cashew purchasing agent, was shot around 1:pm on Saturday.

The body of the man, yet to be identified, was found in a pool of blood with gun wounds in the head near River Pumpu around Kyeremakoma, a suburb of Kintampo.

Though no concrete evidence has been established, a Fulani man, who is believed to be the suspect, has been arrested and assisting with investigations.

In an interview with Adom News, some children, who witnessed the incidents, said they saw a man who approached the deceased for money and while struggling with him, two other masked men joined with guns and started shooting.

This made them (the children), who had gone to wash their clothes in the river and others coming from farms, ran for their lives.

The police have since deposited the body at the Jema Government Hospital Mortuary pending investigations. 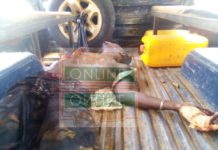