Customers of defunct gold dealership firm, Menzgold, are being asked to vote massively for the opposition National Democratic Congress (NDC) if they want their monies back.

National Communications Officer of the party said within the first year of an NDC government, all lockup funds will be paid.

His comment follows a promise made by former President John Mahama to pay customers their monies locked up in collapsed financial institutions.

“I pledge on behalf of the NDC that we shall pay within one year all who have funds locked up with the collapsed financial institutions. Within one year.  I promise!” he said.

What was not clear in Mr Mahama’s speech was whether customers of the defunct gold dealership firm will also get their monies back.

“John Mahama is caring and will not allow the investment of such people go waste so the next NDC government will pay Menzgold customers their monies,” he stated.

As a social democratic government, the NDC man said they have the interest of Ghanaians at heart and will do everything possible to ameliorate their suffering under the Akufo-Addo government.

All the NDC needs, Mr Gyamfi said, is for Ghanaians, especially those affected by the collapse of financial institutions to vote massively for the NDC in the December general election. 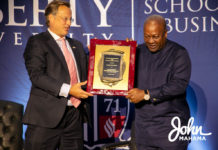