President of policy think tank, IMANI, Franklin Cudjoe has dared President Nana Akufo-Addo to also conduct a Facebook Live session with Questions and Answers from Ghanaians as that is the new “game.”

The IMANI boss, who was apparently impressed by the performance of opposition leader John Mahama during his most recent Facebook Live session, advised that President Akufo-Addo “for look sharp” in the next presidential address which he says must come with questions and answers opportunity as well.

According Mr Cudjoe, Mr Mahama has shown “such depth” and did “pretty well” in the Questions and Answer session too.

He applauded Mr Mahama for taking advantage of digitisation and Covid-19 to get all the online eyeballs.

May Day: Why Akufo-Addo is ‘number one worker’ – Bawumia writes

Charley, JM is trending oooo. He is doing pretty well in the Q&A too- such depth. Nana Addo, boss, the game is now LIVE  interactions with a Q&A opportunity ooo. We for look sharp. Next presidential address for be live with Q&A too, the IMANI boss tweeted.

Some Ghanaian influencers had criticised President Akufo-Addo for his recorded late-night addresses which was later rescheduled to 8:pm following criticisms. It is still recorded and has no question and answer components.

Last Thursday, he held a session at 8:15pm where he promised a potential administration under him would look to expand training for doctors in particular at the University of Health and Allied Sciences and the University of Development Studies.

We have the possibility and we have the plan, if we get elected, to look at the University of Health and Allied Sciences and expand the training of medical professionals in those institutions.

He added that in the University of Development Studies, his administration would “expand the numbers of doctors that we are able to train in that institution.” 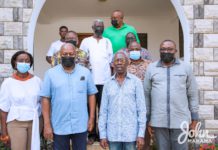