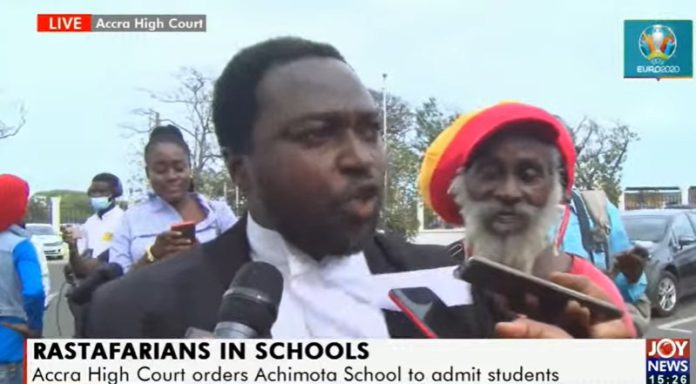 The lawyer, who represented the Rastafarian students in court against Achimota School, George Tetteh Wayoe, has announced his resignation from the National Democratic Congress (NDC).

According to the lawyer, who now identifies himself as Wayoe Ghanamannti, the current dispensation of the NDC does not reflect the foundations it will build.

Mr Wayo revealed this in a lengthy statement in which he recounted his service and sacrifices for the party as someone who joined in 1992.

He explained that the real social democratic discourse he hoped to see for the rapid development of the nation cannot be realised by the current style of the NDC.

“As a true and brazen Social Democrat, I must resign and align myself with a political Party I strongly believe can deliver on this social democratic ideology in a more ‘practical manner’ for the rapid development of Ghana for her future generations,” parts of his statement read.

Though it is not clear which party Mr Wayoe is switching to, he revealed in his statement there have been several attempts by the party for him to join the New Patriotic Party (NPP).

This he said follows a meeting with President Akufo-Addo prior to the 2012 election organised by Lands and Natural Resource Minister, Abu Jinapor, who was a colleague at the Law school.

“I kept telling my Learned Friend that, I cannot become an NPP person because of ideological differences and that my conscience will not rest if I jettison my social democratic nature for any other political ideology,” he stated.

I am Wayoe Ghanamannti, formerly known as George Tetteh Wayoe in the records of the National Democratic Congress (NDC)’ since 1992, I have been a sympathizer and thereafter an official member of the NDC, solely because of the Party’s political ideology of being a “Social Democratic party”.

ln 2004, as a media personality with Space FM in the Western Region, I met Former President Mills and from that point thereon started to work vigorously for the course of the NDC.

In 2007, as a student activist, I met Former President Mahama, who was then a Member of Parliament, and in 2008, as President of Unity Hall on the KNUST campus, l worked with other NDC members in the Ashanti Region for the party’s victory in that year’s elections.

ln the 2012 general elections, l worked tirelessly for the success of the Party and was visible on TV3 during the Eight months long 2012 Presidential Election Petition to defend our Party’s political fortunes for a continuous stay in government to keep the social democratic discourse alive.

It is of prominence, to present herein that my fidelity to the course of our Party has been very strong.

Before the 2012 elections, my Learned Friend and now Minister for Lands and Natural Resources, Samuel Abu Jinapour, then an officer in the office of the President, Nana Akufo Addo, then Candidate of the New Patriotic Party, took a couple of classmates from our Law School class to meet Nana Addo, in an entourage of which I was a member.

Yet, I refused to cross carpet because my social democratic nature and belief would not allow me.

Many months after our meeting with Nana Akufo Addo, my Learned Friend kept insisting that Nana Akufo Addo would like to see me again because Nana believed in young Ghanaians who were passionate about our country.

Yet, I kept telling my Learned Friend that, I cannot become an NPP person because of ideological differences and that my conscience will not rest if I jettison my social democratic nature for any other political ideology.

This is how strong my loyalty is in respect of the political ideology our Party is supposed to be manifesting.

However, over the years, my resolution to continue to be a member of the NDC based on it being a social democratic Party, that puts this ideology in real practice has gradually diminished.

The NDC I envisage, as a Party that is to take this nation onto a more prosperous path, where the coming generation of Ghanaians, would wake up daily and look over the horizon and say, yes, our future is bright, I am at pains to say that, is not the NDC I see in sight.

Yesterday, 1Oth of June 2021 during the 29th Anniversary of the Party, the National Chairman called for the reopening of the Party’s Hero’s Fund, to reward party members for remarkable services.

This call reminds me of a series of ‘Constitutional Amendments’ which a team I led put forward at the last National Delegates Congress.

These proposed amendments were tailored to reorganise the Party’s structural base so that ordinary members who serve their entire lives for the Party and who do not gain any meaningful public office could be recognised and reflected in the holistic family character of the Party when in and out of government.

lt is not surprising that ‘none’ of the over Fifteen (15) proposed amendment Clauses was even recognised for tabling at the Congress and as usual, the fear of them being jettisoned, was realised.

Accordingly, my resolution, which some other members can hold otherwise, is that the real social democratic discourse I hope to see for the rapid development of our nation cannot be realised by the current governance style of the NDC.

Therefore, as a true and brazen Social Democrat, I must resign and align myself with a political Party I strongly believe can deliver on this social democratic ideology in a more “practical manner’ for the rapid development of Ghana for her future generations.

On this note, based on my convictions, I have no option than to resign from the NDC, which I so do by this letter.

lt was a political journey of highs and lows with the NDC, I wish the NDC well and I know my position on the Greater Accra Legal Committee, would be filled by an able NDC Lawyer.

I am convinced to move on, so I can render my political contributions to ‘any other social democratic party’, to help advance its political course for the practical realisation of this ideology for Ghana’s advancement.