Former Ghana winger, Laryea Kingston, has said he is ready to assist Black Stars coach, C.K. Akonnor when his services are needed.

The former Hearts of Oak forward is currently with Right to Dream Academy where he is having his coaching badges.

According to him, getting the opportunity to work under coach Akonnor would help him to develop as a coach towards future endeavours with the senior national team which the former midfielder ha never hidden.

“It will be a dream come true to play a part in the national team with the Black Stars and I will accept a role when offered the chance by the coach,” Kingston told the Graphic Sports.

“Like I always say, I have a dream of coaching the Black Stars in the future, and playing a role in the team’s setup now will help build my capacity for the future,” he said.

He capped 41 times for the Black Stars and scored six goals in the process.

Kingston, who holds a CAF License B certificate and is working on a UEFA License B badge, to join coach Akonnor’s backroom staff said the Black Stars head coach, coach Akonnor, must decide on what role he would like him to play in his team.

He is also working with an Under-19 side of a Danish club, Nordsjaelland. 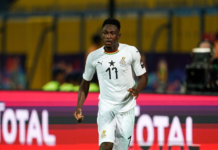