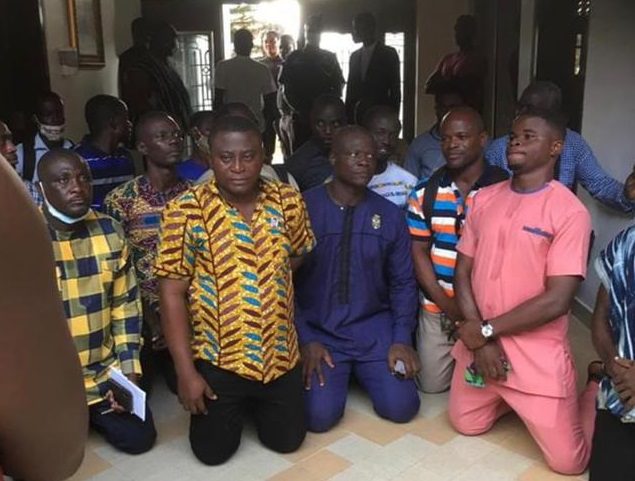 Assemblyman for Nobowam electoral area, Emmanuel Gallo, has revealed why some assembly members knelt to apologise to the Omanhene following the confusion that has rocked the President’s Municipal Chief Executive (MCE) nominee.

Reports were rife that the assembly members were made to kneel and apologise for voting against the President’s nominee, Alex Sarfo Kantanka.

But to Mr Gallo, the assembly members were summoned before the Paramount Chief of the Juaben Traditional Area, Barima Otuo Siriboe II, after holding a press conference over the heavy deployment of armed police and military officers to the election centre on Friday, October 29.

He told Adom FM’s morning show Dwaso Nsem Wednesday that it was their hope that by holding a press briefing to declare their displeasure, President Akufo-Addo and the Ashanti Regional Minister, Simon Osei-Mensah, will heed their call.

However, this inadvertent press conference came at a cost as the Paramount Chief summoned them to inquire about the reason behind their action.

“You know the chiefs held a meeting with us and advised us to just let peace reign.  So, they summoned some of us which I was a part of for our actions and when we got there, we heard someone amid the chiefs telling us to kneel after apologising to the Omanhene,” he said.

According to him, they knelt because they respect their elders and not be seen as arrogant assembly members.

“We respected our chiefs and that made us kneel down. We see it as a culture in our Ghanaian setting and so I don’t see anything wrong with it,” he added.