Ghanaian defender, Jonathan Mensah, has listed top attackers he hates to play against in both African and International football.

That notwithstanding, the 29-year-old player also confessed his fear for Botswana and Ugandan players, explaining they are ‘too tough and well-built’ for his liking.

”I would say it was difficult playing against those deadly strikers but I believe if you want to be the best u play against the best,” he added

Meanwhile, Jonathan Mensah disclosed he would love to join Mubarak Wakaso as a midfielder if he were given the chance to play a different position.

Jonathan Mensah is a professional Ghanaian defender who has represented the national team at two World Cups and currently plays for MLS club, Columbus Crew. 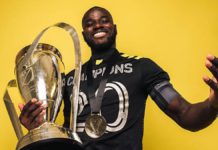