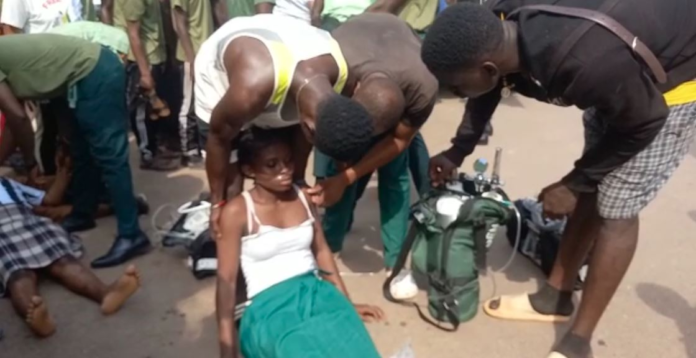 An English teacher with the Islamic Senior High School at Abrepo, Kumasi, Kofi Antwi, is currently unable to see after he was assaulted by the police during the recent chaos that occurred at the school.

This was disclosed by the Guidance and Counselling Coordinator for the Suame Municipal Assembly, Gladys Manu in an interview with Class FM.

The teacher is alleged to have been assaulted by the Police when he confronted them in an attempt to stop them from brutalising the students during the chaos.

“I think it’s because of the tear gas; because they used it on him and the tear gas it will take some time before…because it’s painful, so, the moment he opens his eyes he feels the pain.”

According to Mrs. Manu, who is also leading the counselling team in charge of helping the students overcome the trauma from the incident, the team has made some progress with the victims.

“Previously, there was anxiety, fear, and a whole lot. But with the guidance and counselling team being with them from Monday till now, you can see them smiling and chatting as if nothing is happening.

“Because we’ve told them it’s just an accident that happened. They should forgive themselves and forgive those that did those things and you can see from their faces, I think I don’t even have to tell you. They’re smiling, they’re okay, they have forgiven themselves and the police. Some were in a very bitter mood that they said, they can never forgive the Police. Somebody said she wanted to be a Policewoman but for now she has cancelled it. But the person is now okay saying that she has forgiven them and she has forgiven herself,” the Guidance and Counselling Coordinator explained.

She continued: “All that we’re trying to do is to bring their minds back to their books and then forget about this issue and also guiding them that in case of anything, there’s a guidance and counselling coordinator in their school instead of going their own way, they should rather go to the coordinator, they should submit to him or her.”

She assured the students of their support for them.

She further continued: “As for the teachers, one is seriously sick. From here we have to go there and visit him. He was just discharged yesterday but right now, he can’t see.”

She added: “I think it’s because of the tear gas. They used it on him, and it will take some time for him to see because it’s very painful.”

Thirty-eight students of the school were rushed to the hospital after they clashed with some police during a demonstration on Monday.

The students were demonstrating against the frequent knockdowns near their school and in their attempts to disperse the demonstrators, the police fired warning shots and tear gas at them.