Bishop David Oyedepo, the General Overseer of the Living Faith Church International aka Winners’ Chapel, has advised women against joining the feminist movement.

He said this on Sunday, August 8, while preaching about total obedience to the word of God.

He lamented that women now feel they are wiser than God when the issue of submission comes up and he blamed this on the feminist movement. He warned the women in his church that feminism leads to frustration and devastation.

He said that when the Bible says “submit yourself to your husband in everything,” women respond saying, “no, not today, that was before. Right now, nobody can do that. We are co-heirs, male and female, no difference.”

He added: “Right now, there is a feminine revolution. And then you get into feminine frustration and destiny devastation.”

He continued: “You know something, no book on earth will ever overtake the Bible in currency. It is the eternal truth. While the earth remains, the truth of scriptures remains in force, you either choose to follow or go your way.

“For we can do nothing against the truth, no matter what civilisation we are talking about, but for the truth at all times.

“So, if feminist revolution is your vision, don’t attempt to get married, because it won’t work.” 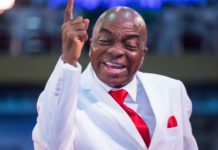 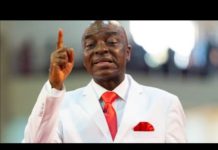