Member of Parliament (MP) for Mpraeso constituency, David Ansah Opoku, has defended his actions following his conduct to walk out the General Secretary of the National Democratic Congress, Johnson Asiedu Nketia, from the public gallery.

To him, it wasn’t right for ‘General Mosquito’ to be in the house as he would have done likewise to the lawyer and communication strategist, Gabby Asare Otchere-Darko.

Speaking with Joy News’ correspondent, he explained that the public for some time weren’t permitted to occupy the gallery due to COVID-19, except the media.

“As MPs, we are masters of our own rules and we both know that for quite some time, members of the public weren’t allowed in the gallery and it was largely because of COVID and its associated issues,” he stated.

“We used to see schoolchildren sitting at the gallery to experience how proceedings are carried out but when COVID came in all these things were stopped,” he continued.

“So how special is Asiedu Nketia that he would be allowed to sit in the gallery?” he asked.

He noted that the role of ‘General Mosquito’ as Member of Parliamentary Service doesn’t allow him to sit in the gallery.

He responded to allegations of neglecting the presence of Mr Otchere-Darko in the gallery when the Majority in Parliament were passing the budget.

“A member of the Parliamentary board doesn’t sit in the gallery,” he claimed.

“The day we were approving the budget I didn’t see Gabby-Otchere seated in the gallery, If I had seen him I would have walked him out,” he told Joy News. 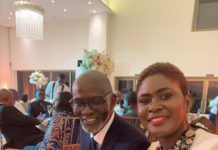 Gabby Otchere-Darko steps out in style with wife