The Minister of State at the Ministry of Finance, Charles Adu-Boahen, has refuted claims that he has tendered his resignation to the President.

In a short reply to such claims, he said “No sir! Never. You can quote me. I have not tendered my resignation.”

His response comes amidst calls for his removal or resignation from office as a result of the economic downturn.

On Tuesday, October 25, 80 out of the 137 majority MPs had joined calls for the sacking of the Minister of Finance, Ken Ofori-Atta, and the Minister of State at the Finance Ministry, Charles Adu-Boahen citing their poor management of the country’s fiscal space.

They had also blamed the duo for the delay in the ongoing International Monetary Fund programme negotiations that is expected to give the country a bailout.

The lawmakers added, “We are by this medium communicating our strong desire that the President changes the Minister of Finance and the Minister of State at the Finance Ministry without further delay to restore hope to the financial sector and reverse the downward trend in the growth of the economy.”

The group, led by the MP for Asante Akim North, Andy Appiah-Kubi, said the failure of government to heed to their demands will result in them boycotting all government business.

“Meanwhile, we want to serve notice, and notice is hereby served that until such persons as aforementioned are made to resign or removed from office, we members of the majority caucus here in Parliament will not participate in any business of government by or for the President by any other minister.

“We hope that those of us [at] the backbench and members of the majority caucus will abide by this prayer. We are saying that if our request is not responded to positively, we will not be present for the budget hearing, neither will we participate in the debate”.

Their move was applauded by the general public and civil society who had also been calling for the resignation of the Finance Minister.

However, in a U-turn, the MPs later acceded to President Akufo-Addo’s appeal to let Ken Ofori-Atta and Charles Adu-Boahen stay till after the IMF deal is sorted out.

In a statement released by the Majority Leader, Osei Kyei-Mensah-Bonsu, he said, the Minister of Finance and the Minister of State at the Finance Ministry will stay “until the conclusion of the round of negotiations with the International Monetary Fund (IMF) and the presentation of the Budget Statement and Economic Policy in November 2022 and the subsequent passage of the Appropriation Bill after which time the demand will be acted upon.” 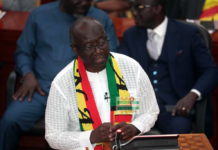