Her revelation comes after she decided to leave the party her father formed and contest as an independent parliamentary candidate for the Jomoro constituency.

Ms Nkrumah won the Jomoro seat on the ticket of CPP in 2008 but lost the seat four years later when she contested as an independent candidate.

However, the daughter of Ghana’s first President, insists that she is still committed to the ideals of her father.

“I have not abandoned our father’s vision, I am an Nkrumaist by birth, by blood and by conviction. In fact, the reason I am still doing this politics is to honour our father’s great legacy,

“By making a contribution in practice, in demonstration so that people, especially young people will understand what this legacy was about. And it was about serving the people,” she said.

Ghana’s first President, Dr Kwame Nkrumah, formed the CPP in June 1949 after he broke away from the United Gold Coast Convention.

On the ticket of his party, he rallied enough support to become Ghana’s first Prime Minister in 1957, and subsequently, the first President in 1960.

However, ever since he was overthrown in 1966, his party, the CPP has struggled to win power. 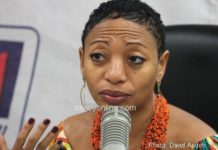