Dr Sekou Nkrumah, the youngest son of Ghana’s first president, Dr Kwame Nkrumah, has explained why there is bad blood between him and his siblings – Samia Nkrumah and Gamal Nkrumah.

Taking to his Facebook page, Dr Nkrumah wrote that, it was his siblings’ decision to revive their father’s political party, the Convention People’s Party without him despite being the first among them to enter the Ghanaian political space in 1989, a period in which they both weren’t even interested in coming to Ghana.

Why are Nkrumah’s children politically divided?

Sadly we are: Gamal and Samia stand on one side, and Sekou on the other. As you have noticed I am leaving Francis our big brother (from a different mother) out of this because he never showed any real interest in politics.

Well, to begin with, I will say that when I returned to Ghana in 1989, my brother and sister were not interested in living in Ghana at all, and I was the only one determined to make Ghana my home at the young age of 26!

It was not an easy return, and I am not the easiest of persons to deal with. I tend to be very stubborn and independent-minded. But life has a way of teaching you things the hard way.

Anyway, I got involved in Ghanaian politics but because I belonged to the opposition and was very young and inexperienced at the time many people did not get to know me or know about me! As a country too we were also relearning the ways of party politics, and the multi-party system of democracy after almost a decade of military rule and a culture of silence.

The media too was fast-growing, and I was equally involved with it at different levels. Both in the print and electronic!

When my sister returned to Ghana after our mother’s death she clearly had an agenda and an ambition, and that is perfectly normal! The problem, however, was why she and my brother decided to keep me in the dark.

True they are both older than me ( five and four years almost) but that is no excuse to slight or disrespect their younger brother.

You see if they had shared their interest in reviving the CPP with me I believe things would have been done differently!

Even if I did not agree with them on for example socialism or the viability of the party in contemporary Ghanaian politics, we would have at least shared our experiences and knowledge, and kept a unified front in the public eye and I would not have been critical of my sister! At least not in public!

But that was not to be and their involvement in my son’s life and his subsequent death really made matters worse. Again the lack of communication between us in such serious matters brought out the worse in me and ended badly for my son, Alin.

Is there a path for reconciliation?

To begin with, they never showed any remorse up to this day concerning the death of Alin! I do not demand an apology, I just ask for a truthful recognition that they should have consulted with me first before deciding to facilitate his coming to Ghana!

Yes they might have had good intentions for him, but what they failed to see is that being his father I was aware of a lot more of what went on in his life! And I was definitely convinced that life in Ghana would not be easy for him! To put it bluntly, I did not want him to go through the struggles I went through in Ghana since my return and rather preferred him to find his purpose in life in Europe where he grew up anyway!

Well, that recognition of a failure in judgment on their part never came, so my reservations still remain.

I concede that people can see things differently, especially as we had grown apart since the early 1980s when I lived in Europe! But bad blood among siblings is not a good thing, especially for ones with a legacy as ours! 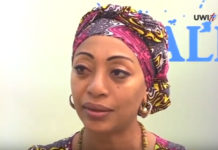