Newest internet sensation, Big Ivy, says she is overwhelmed with the responses and support on social media following her ‘Big Momma’ song.

According to her, Big Momma, a song that birthed the Ghanaian actor’s beef with Nigeria’s Mama Dolarz, has given has made her more popular than her acting career ever did.

Speaking on Hitz FM, Big Ivy revealed that rap was something that she loved growing up, but she dropped it to focus on getting her degrees and later an acting career.

She stated that she has been in many productions including Abiba, Things We Do For Love, TV Theatre, Home Sweet Home and YOLO over the years.

She noted that it was not until her recent chat with her son, rapper CJ Biggerman, that she open up about her passion for rap.

“I have been acting for about 20 years now, I have not been this big. I am surprised especially on social media, I wasn’t expecting it to be this big, I really like it, it is noise, this world has a lot of stress, so we are using it to distress, so we are having fun,” she said.

Big Ivy noted that although she does not have people jumping to meet her when she steps out, there are many on social media who know and follow her now.

She added that this has placed her in a position to be a model to all who would be inspired by her life to make something for themselves.

This comes after the lyrical feud between Big Ivy and Mama Dolarz intensified this week, with the former releasing a new track dissing the latter.

The beef started when CJ Biggerman chose to celebrate his mother by collaborating with her on a song called Big Momma.

The creative piece got to some Nigerians, who suggested their mothers would outdo Big Ivy.

When Nigeria’s Mummy Dolarz with the help of her son comedian Oluwadolarz released a track throwing shots at Big Ivy, a new Ghana-Naija beef was officially born.

Big Ivy did not wait to be over shined, so she went back to the studio and released a new track for Mummy Dolarz. The Nigerian is also readying herself to reply.

Meanwhile, opening up about working with her son for the release of Big Momma, Big Ivy said that they both combine their knowledge and love for literature to come up with impactful, lyrics that rhyme and are still entertaining.

“I asked him to let us do something creative, so he wrote for me, and we discussed what could stay and what should change. I sit in the studio when he is writing, and then we look at what he has and say ‘let’s change this, this doesn’t rhyme’. I am very particular about the lyrics, I don’t want to use.”

Big Ivy also added that she has a single and an EP coming.

According to her, the release of the single was pushed aside when the beef with Nigeria’s Mummy Dolarz started. 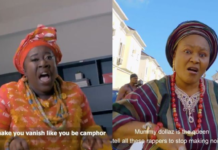 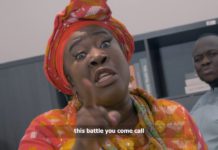 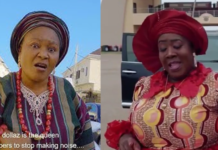