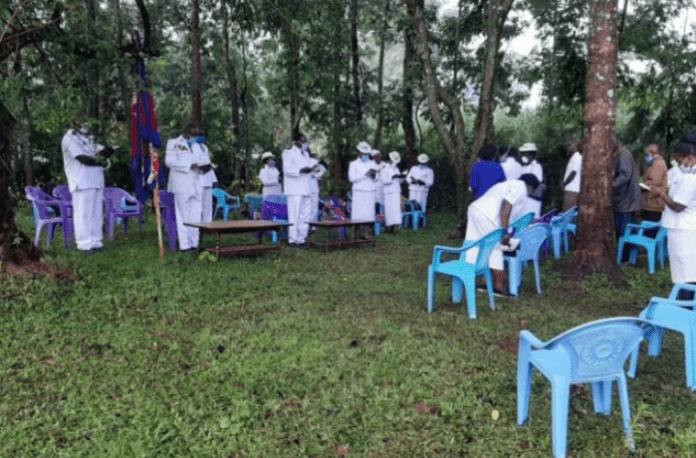 The chairs were placed at least 1m (3ft) apart – family sat on one side, church officials on the other. Everyone wore a mask.

Everyone knew of the strict instructions that the Kenyan government had laid down for funerals during the coronavirus pandemic.

Only 15 people could gather for the burial of my cousin, Chris, and everything had to be done by 09:00 local time.

By 07:00 the rest of us had gathered, in front of our phones and computers, watching the burial unfold as a friend live-streamed it on Facebook.

There were hundreds of us to pay our last respects to Chris. He was a people’s person – the life and soul of family parties.

His deep laugh reached you even before he set foot in the house – in fact, you could hear it 200m away at the gate.

And Chris used to show up for people, be it at funerals or weddings. He was a great mobiliser, rallying people for all occasions.

So, on this day, we showed up for him too. But not being there meant it was not the same.

We couldn’t play his favourite songs

Chris was my immediate cousin, but we were raised in the same house and he was more than a brother to me.

He died in Kisumu in western Kenya on Easter Sunday, after being unwell for a few weeks with liver cirrhosis.

The government gave us the guidelines for his burial. He had to be buried within three days.

But with many of his family and friends under lockdown in the capital, Nairobi, not everyone could attend the burial.

The sermon was short. The speeches were restricted. And there was very little singing.

Chris loved music – he played the drum kit in the Salvation Army church band. So it was painful that nobody could be there to play his favourite songs.

I watched as live comments from his friends and colleagues rolled in on Facebook.

In digital solace, people left messages of condolence and talked of how great a man Chris was.

And I thought, maybe I should take screenshots and print this out because this was essentially our condolences book.

Everything felt so different. We could not hug, touch or see each other’s tears. We could not throw fistfuls of dirt on the coffin as it was lowered into the grave.

When a loved one dies we seek to grieve, we look for comfort and closure. But how do you that when you are confined?

I was upset. I never imagined I would have to bury a loved one through social media. I never thought I would crave human contact that much. It was like a movie, except that I was part of the cast.

And sadly, the Facebook Live failed, due to a poor network connection. So I could not even watch Chris’ final journey to the very end. I did not see his coffin being covered.

In many African societies death and life are intricately tied. Many traditions see death as a rite of passage – a transition to another form.

Hence the importance of ancestors – they are the people who have died but continue to “live” in the community.

This, in turn, means that when people die they must receive a perfect burial – complete with rituals that have been observed for generations.

For the communities in western Kenya where I come from, like the Luo and Luhya, a person’s death and their burial are incredibly important events.

A dead person is treated with utmost respect and there are death and burial rites to be followed, to ensure a faultless send-off.

First of all burials are not hurried, especially for the elderly. A person’s death is a call for celebration, even amidst the mourning and grieving.

It takes at least a week for an adult to be buried. There is loud mourning and weeping, for days on end. People huddle together and help the bereaved to mourn.

Bonfires are lit in the homestead and people gather around them, embracing, crying, reliving the life of the departed.

There is the ritualistic slaughter of animals, and the preparation and serving of food and drinks to console mourners. It is a show of unity amongst neighbours and family.

The dead are brought home a day or two before the burial. They lie in the compound, to show that they are accepted and loved, even in death.

Forty days after one is buried, a memorial service is supposed to be held – the final celebration of their life. We, again, will not be able to do this for Chris.

I have this feeling that I have only partially grieved for Chris. This is not how he deserves to be mourned.

Maybe when all this is over – when we can hug again, and cry in each other’s arms – we will mourn him like we should.