National Democratic Congress (NDC) Members of Parliament (MPs) could not hide their joy after their candidate, Alban Bagbin won the bid as Speaker of the 8th Parliament.

Amid singing and chanting over their victory in the fierce election, they moved about in the House in a frenzy.

Clad mainly in white attires, the MPs left their seats and headed towards their leadership to begin the celebration.

MP for Ningo-Prampram, Sam George and Ayawaso North MP, Yussif Jaja carried MP for Asawase, Muntaka Mubarak on their shoulder while the others danced to praises.

To them, it was Mr Mubarak’s vigilance that ensured the Speakership victory for the party in the 8th Parliament.

He accosted and retrieved ballot papers from New Patriotic Party MP for Tema West, Carlos Ahenkorah who snatched ballot papers and bolted with them during counting in the election.

One of the oldest serving MPs polled 138 votes against his predecessor’s 136 with one spoilt ballot.

The long dragging process, which started at 12:am on Thursday, January 7, delayed the swearing-in of MPs-elect. 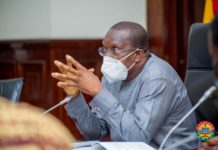 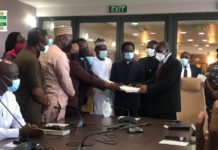 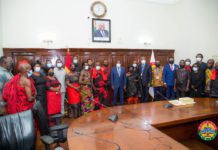 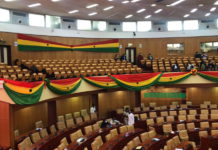