Shop workers in a South African town hit by ongoing riots foiled looters by pouring cooking oil on the floor outside the entrance to their store.

It is in a mall in the town of Tugela Ferry in KwaZulu-Natal, one of two provinces where days of looting have left shops, warehouses and factories bare.

A video of the Shoprite employees pouring the oil has been shared online.

The store’s manager, Mduduzo Sikhakhane, told South Africa’s Times Live that the trick had saved them from being looted.

“No-one could go to that side because they were slipping like crazy,” he said.

It was reportedly the only store in the mall that was not broken into.

Another video of people sliding while trying to walk outside the store has also been posted online, with people lauding it as a brilliant way to protect businesses.

Shoprite’s management has said that it is working on rebuilding and restocking other stores that have been affected by the looting.

Protests, which started in KwaZulu-Natal and Gauteng provinces after the jailing last week of former President Jacob Zuma, have descended into riots.

At least 72 people have died and more than 1,700 have been arrested in South Africa’s worst unrest in years.

According to KwaZulu-Natal’s premier, Sihle Zikalale, the province is looking at damages estimated to be around 3bn rand ($206m, £149m). 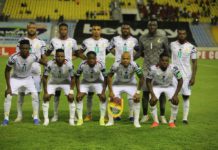 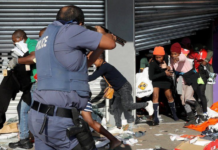