The Asamankese Circuit Court has convicted a 34-year-old head porter to a fine of GH¢120,000 for possessing a narcotic plant.

In default, Kwaku Tweneboah, will serve three years in prison as his action is contrary to section 41(2) of the Narcotic Control Commission Act 2020 (Act 1019).

Prosecutor General Sergeant Samuel Owusu said the complainants, in this case, are policemen stationed at the Akyem Oda Division whilst the convict is a porter at Oda.

He said on July 6, at about 11:00 am, the complainants, who were on motorbike patrolling the Oda township had a tip-off that the convict together with a group of young men had gathered at a location noted for drug peddling.

According to him, the police proceeded to the location where they found the convict and some other persons trading drugs.

The suspects, he said, upon seeing the police bolted but were chased until the convict was arrested near a dilapidated wooden structure.

Sergeant Owusu said the convict threw away a black polythene bag in his possession. However, the officers retrieved it and found 51 wraps of narcotic plant suspected to be cannabis and an amount of GH¢7.00.

He was sent to the Oda Divisional Police Command where he was charged and arraigned. 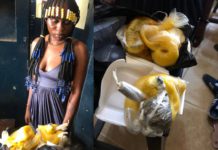 Man jailed over sexual assault of woman in the bush