This was revealed by the Programme Manager, Expanded Programme on Immunisation at the Ghana Health Service (GHS), Dr Kwame Amponsah-Achiano, on Friday.

“We will start on Tuesday. We had hoped to start this week but the preparations were quite enormous so come Tuesday, we will start,” he assured.

Speaking on JoyNews’ AM Show, he indicated that the plan for the vaccination is to adopt what is known as equitable distribution.

“Remember we have some backlog of Ghanaians who took the first shot and are waiting for the second shot,” he recounted.

He noted that in epidemic control, the most vulnerable persons are prioritised for protection before those considered to be stronger until everyone is covered.

“And so when we started the roll-out [in March], we looked at population segmentation where we targeted health workers, front line persons and security people, people who are above 60-years and older and also people with underlying conditions,” he noted.

According to him, “we have the data of vaccination and all that and that was why when we were doing the second dose we targeted those who had received from 1st to 9th [March].

“So for this exercise, we are doing part of the health workers as well as the general vulnerable population,” he explained.

“We’ve done some equitable distribution to health workers across the nation and then of course we will then also continue from where we left off with those who would have received the first dose of vaccine from 10th to 29th,” he added.

Dr Amponsah-Achiano further noted that the country is expecting some 600,000 doses of the AstraZeneca vaccine, therefore, he is optimistic that the rest of the citizens will be vaccinated by end of the year.

“We still have AstraZeneca in the pipeline and so by the middle of September, we would have covered the rest of the people and so we are on track and hopefully we will be able to do that,” he said.

Meanwhile, the country’s cases have started surging again as nine more deaths have been recorded within 48 hours. 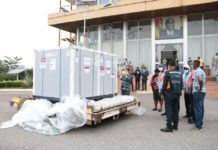