Musician and leader of The People’s Project, Kwame A Plus, has opined Ghana needs a change in leadership style to foster development.

As someone who had so much faith in the Akufo-Addo led government to deliver on its mandate, he has bemoaned the President has become too soft for the position.

A Plus disclosed this on Adom TV’s Nnaw)twe yi as pressure mounts on the government to fix the country.

“Akufo-Addo is the real man of peace even than Atta Mills but where we have gotten to as a country, we need someone with the temperament of a lion like Kennedy Agyapong to be president.

“Akufo-Addo is now a pastor and too nice to rule Ghana but you can’t be nice and rule the country because Jesus was not nice and that was why he was able to rebuke the Pharisees,” he stated.

He explained the incumbent government condemned a lot of wrongs under the erstwhile Mahama administration, however, the same things seem to be glaring at them in the face yet they remain silent.

A Plus stressed President Akufo-Addo was one fearless and fearful personality who many Ghanaians believed was going to turn around the fortunes of the country.

“People were happy we have had the President who is courageous to lead the country and make firm decisions but it doesn’t seem ‘the I believe in Ghana’ exists any longer,” he lamented. 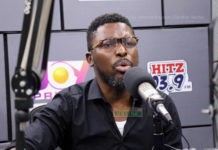 A Plus’ interesting take on Achimota SHS, Rastafarian brouhaha