Award-winning dancehall musician, Stonebwoy, has joined the list of musicians who are ready to use their power to influence society when it comes to the implementation of policies.

The four minutes-nine seconds video throws light on the havoc wreaked by the menace and the need for all and sundry to support the government’s bid to end it.

Stonebwoy expressed sadness on the economic loss, greater loss of lives and property, poisoning of soil and groundwater, biodiversity loss and chemical leakages, among others.

He lamented the invasion of foreign companies into the country to engage in the illegality at the expense of citizens.

The song further stressed the need for the land and natural resources of the country to be protected for the sake of future generations.

The Minister for Lands and Natural Resources, Samuel Abu Jinapor, has since commended the artiste on his creativity and also for adding his voice to the fight.

“Let me use the opportunity to thank my good friend Stonebwoy for this intervention and also to say to him that it is a very noble and patriotic thing he is doing. From the very beginning, on the instructions of President Akufo-Addo, we’ve been working to ensure that our renewed commitment and effort to sanitise the small-scale mining sector are broad-based, multi-faceted, and galvanise all the stakeholders and actors in our society,” he said.

According to him, the fight is a national agenda that requires all to get on board, hence, Stonebwoy’s way of support was a step in the right direction.

“This is a national issue and the consequence of this is on all of us. Of course, the government must take the lead role and must have a much more primordial role to play but the kind of intervention from Stonebwoy and others is welcoming. I want to commend him highly for this intervention,” Mr Jinapor lauded in an interview on Accra-based Citi TV.

Listen to Mr Jinapor in the audio above: 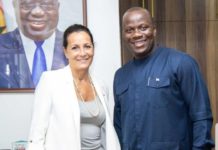