In the following investigative report, Manasseh Azure Awuni of The Fourth Estate reveals how a licensed health practitioner in Ghana’s capital, Accra, used his facility and practice as bait to sexually assault scores of women who went there seeking treatment.

Apart from his unprofessional and criminal conduct, “Dr” Jonathan Ohene Nkunim and his facility, Nature’s Hand Therapeutic Centre, also had three licenses from a state regulatory agency that is charged with the power to sanitize practitioner’s like him.

The investigation reveals the dubious process through which Ohene Nkunim acquired the licenses and the role of regulatory officials in that.

Here is the full documentary titled, “The Licensed Sex Predator”: 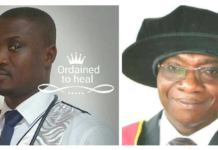