The rags to riches story of presidential hopeful, Samson Asaki Awingobit, will make you cry.

The 41-year-old businessman shared how he struggled to make ends meet in a small wooden structure with his family at Ashaiman to motivate others.

Sharing his story on Asempa FM’s Ekosii Sen programme Friday, Mr Awingobit said he has been able to transform his life in 12 years through hard work and determination.

He indicated that in 2008 when he was the parliamentary candidate of the People’s National Convention (PNC), he was sharing a small kiosk with his wife and son.

When he decided to further his education, Mr Awingobit said he had no help but the prayer of a man of God changed his life for good.

“I decided to change my destiny and with the help of God, I have now built my own house and my family is comfortable so this should tell you it doesn’t matter where you start from, prayer works,” he said.

Mr Awingobit was full of praise for his wife who stood by him in the difficult times and is still supporting his presidential ambition.

The businessman, who is vying for the flagbearer position of the People’s National Convention (PNC), said he is the best bet for the party.

He indicated that, having been a parliamentary candidate for the party and his experience in life, he is the best man to transform Ghana.

When given the nod, Mr Awingobit, who is the Executive Secretary of Ghana Exporters and Importers Association, said he will make industralisation his focus.

He urged all PNC members to vote massively for him to lead the party in the December polls. 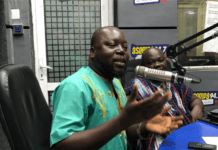