A four-year-old boy has been found dead in the room of a tenant at Boete in the Obuasi East District of the Ashanti region.

The unfortunate incident occurred in the early hours of Thursday, April 29, 2021.

Distraught mother of the deceased, Obaa Yaa in an interview on Adom News said the child was bathing when she left the house to buy porridge.

Upon he return, she said the child was nowhere to be found. She then raised an alarm and her co-tenants helped in a search only to find the lifeless body of her son under the bed of a tenant named Kwame Agyei.

The 21-year-old suspect is said to have bolted after committing the heinous crime. The residents then reported the matter to the police.

He said the suspect has been arrested and is assisting police with investigations.

Residents in the area who are still in shock have called for tight security in the area.

Meanwhile, the body of the deceased has been deposited at the Obuasi Government Hospital pending autopsy. 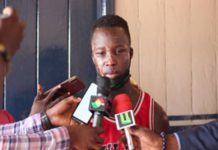 Adebayor flaunts his all-grown daughter to celebrate her birthday