Ghana’s consulate in Dubai has announced the arrest of some five Ghanaians in the United Arab Emirates (UAE) for trafficking marijuana.

The consulate, in a statement released on April 21, 2021, said the suspects were arrested between January and March 2021.

The consulate said in some cases, the accused persons had no clue the drugs were in the packages given to them.

“The drugs were mostly hidden in food items and nicely packaged to be delivered to other persons in Dubai on arrival.

“One person has already been sentenced to 10 years imprisonment for carrying drugs to the UAE,” parts of the statement noted.

Meanwhile, the consulate has urged Ghanaians traveling to the UAE to never accept parcels meant for others without first ascertaining the contents of the parcel.

Marijuana farming to be legalised in Ghana 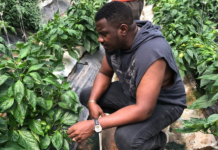 Why is cigarette legal and marijuana still illegal in Ghana? – Dumelo asks