Zimbabwean police have cautioned unsuspecting men and the general public to be wary of a group of women accused of sexually assaulting men in the capital Harare.

Two separate incidents were reported last week after an August last year incident when four women drugged and “sexually molested” a 29-year-old man they had offered a lift.

He explained that another female passenger joined the bus before the driver later changed his route to “evade a police roadblock”.

“On the way, one of the females who had boarded the vehicle together with the complainant, drew what appeared to be a pistol and force-marched the complainant into a bushy area along Delport Road,” The Herald quoted the police spokesman.

Chief Superintendent Nyathi also narrated the ordeal of the second victim who was given a lift to Harare by five women. He was offered a drink which left him unconscious.

“When the complainant gained consciousness he discovered that he had been abused,” he said.

He urged the public with information to assist the police with their investigation.

“We would like to urge members of the public to be on the lookout for a group of men and women who are giving unsuspecting victims transport and end up abusing them,” Chief Superintendent Nyathi advised.

Similar incidents also spiraled in September 2015 when two women allegedly raped a man at gunpoint after offering him a lift, The Herald reports. 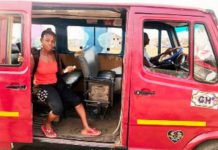 207 Benz romance, meet the couple working together as driver, mate

My client will die in custody — Alleged rapist’s lawyer