A former Director-General of the Criminal Investigations Department (CID) of the Ghana Police Service, COP Bright Oduro, is calling for an investigation into the death of the key suspect in Professor Yaw Benneh’s killing.

“Considering how the death was stated, I think the right channels have not been given. They said he fell unconscious while in custody; what time did he fall unconscious? All these matters must be investigated,” he said.

Speaking in an interview on Accra-based Citi FM, he said a lot of answers must be provided to help fully understand and resolve the issue.

“He could have died of natural causes, from illness. In fact, we should investigate whether special attention was given to him when he was in custody,” he urged.

COP Oduro’s comments come after the police confirmed that James Nana Wamba, the lead suspect in the murder of Professor Emmanuel Yaw Benneh had died.

Mr Womba is reported to have passed on Saturday, October 17, 2020, after he was admitted at the Police Hospital for treatment.

Though the police indicated he was on oxygen, the cause of death is yet to be known. 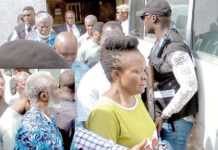