The Greater Accra Regional Security Council has issued a 48-hour ultimatum to illegal developers on a 200-acre of land belonging to the Animal Research of the Council for Scientific and Industrial Research (CSIR) at Frafraha, Accra.

“I have received complaints from some government officials that government lands are being encroached. An example is what we see at CSIR. It is said that people have the effrontery to take over government property.

“REGSEC will meet soon, and I will take a decision in no time. I will ensure that the situation is dealt with in no time,” REGSEC Chairman, Henry Quartey cautioned.

Mr Quartey, who doubles as the Greater Accra Regional Minister, addressing the media after a visit to the site threatened to demolish all illegal structures after the ultimatum elapses.

“REGSEC is hereby giving a 48 hour notice from now to all those who are putting up such unauthorized structures within the fenced wall to pack their tools and materials from the land without fail.

“Any person found loitering on the fenced 200-acre land after the deadline will be dealt with in accordance with the laws of the land,” Mr Quartey cautioned.

The institute, he stated, has over the years complained about the increasing level of encroachment of about 800 acres of its over 1,000 acres lands.

The Minister indicated warnings issued by the Adentan Municipal Assembly and the Animal Research Institute to these developers have not been yielded to.

However, the situation, he described as impunity on the part of these encroachers, will not happen under his watch. 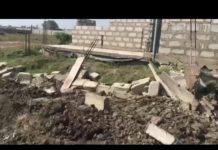 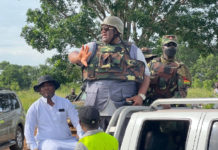