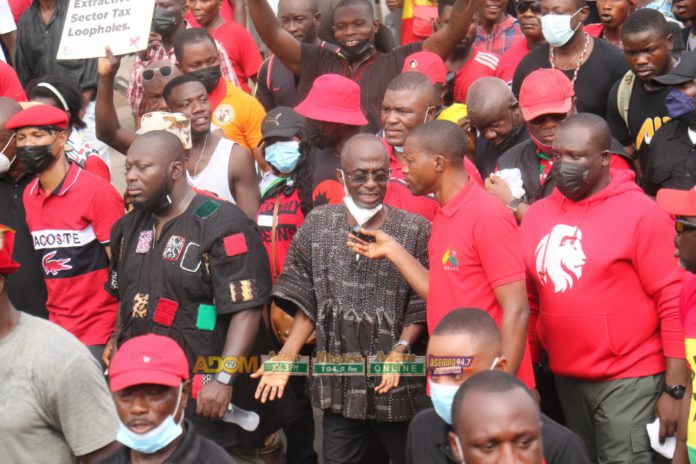 “We will abolish E-levy within the first 100 days when we assume power,” the General Secretary of the National Democratic Congress (NDC), Asiedu Nketia has declared.

According to General Mosquito, as he is popularly known, the proposed levy is not taxation but daylight robbery.

“We are not against taxation. Taxation is for value addition. But we will not sit and watch the government keep robbing us. The E-levy is not taxation, it is daylight robbery.

“The fire will keep burning so long as we have a government that operates with impunity,” Mr Nketia said.

This was when he joined members of the Coalition of Concerned Ghanaians on the Yentua demonstration on Thursday.

The demo saw scores of Ghanaians converge at the Obra Spot at the Kwame Nkrumah Circle march through the principal streets of Accra to express their displeasure over attempts by the government to push the controversial bill through parliament.

The chief scribe stressed they [NDC] will not relent on its opposition against the levy.

“The alternatives are there. Who in his right senses in this country asked the Minister for Roads to argue that we abolish the road tolls and convert the tollbooths to toilets and washrooms?” he queried.