Two workers of an electricity company, believed to be in Cameroon, have been electrocuted while working on a light pole.

The double tragedy was captured on tape by some nationals who were observing the two men work.

It is unclear the exact situation, but from a video widely circulated, it could be said that the area suffered some form of electricity defect of which the workers were attending to.

In the video, one of the workers was hanging at the top of the pole, believed to be dead, while his colleagues made efforts to bring him down.

One of the electricity workers climbed the ladder to help, but he was also electrocuted by one of the strings he was sitting on.

It appeared that the second worker was loosening some wires which had entangled his colleague.

He managed to cut off a few wires before one of the strings went in flames, electrocuting him in the process.

Seeing the severity of the incident, the other workers backed out leaving the two men to their fate.

Tears as lady is electrocuted at night club

Audio: Two persons electrocuted to death, others in critical condition at Tamale 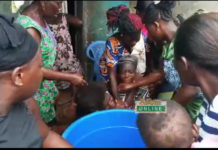