A Former Member of Parliament for Ablekuma Central, Theophilus Tetteh Chaie, is calling for the reinstatement of the headmaster of the Tempane Senior High School (SHS) in the Upper East region, Dominic Ndegu Amolale.

According to Mr Chaie, the headmaster cannot be held responsible for the conduct of students who know right from wrong.

The Ghana Education Service (GES) suspended the headmaster last Saturday after a video went viral of an aspiring National Organiser of the National Democratic Congress (NDC) Joshua Akamba, allegedly inciting some students of his school against President Akufo-Addo over the challenges facing the implementation of the free Senior High School programme.

Ndegu Amolale was instructed in a letter to handover the management of the school to the Upper East Regional GES Director to allow for investigations into the incident.

He indicated that the governing NPP lacks the moral right to react in this manner because they openly campaigned in various Senior High schools in the run-up to the 2016 general elections that brought them to power.

“They should not put their frustration on the poor headmaster; he did no wrong. how do you expect him to stop children old enough to vote from sharing their plight to a politician,” he quizzed.

Hon. Tetteh Chaie who is also the Greater Accra Regional Secretary of the NDC revealed that, although GES rules clearly prohibit political activities in schools except at the tertiary level, both NDC and NPP often flout the rules.

“If we believe in the freedom and right of the citizens of the country, let there be light. the intimidation of teachers must stop,” he bemoaned. 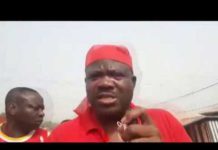 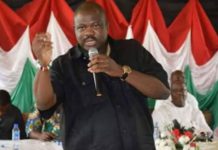 Akamba is the worst Organiser Ghana has ever had – Nana B