Member of Parliament (MP) for the Odododiodio constituency, Edwin Nii Lante Vanderpuye, is raising concerns over the delay of police investigations into the recent bullion van attack at Adedenkpoe at Jamestown, three weeks ago.

On June 14, 2021, robbers shot and killed two people including the police escort on duty and a bystander, and made away with an unspecified amount of cash.

Mr Vanderpuye said tension is gradually growing among the residents of the constituency as the police have still not released a report on the outcome of investigations.

“It’s a bit worrying because this has made residents of the area very uneasy because a once boisterous area like Adedenkpoe now by 6.00, 7.00 everybody has run into the house, people with shops have closed. We expect that by this time the police would have come out to make some statements and to set the families at ease,” he said.

Meanwhile, details have emerged that suspects in the Adedenkpoe bullion van robbery attack at Jamestown trailed the van for more than two hours before finally crossing it at gunpoint.

On Tuesday, fresh CCTV footage’s sighted by JoyNews captured the suspects at several intersections, riding on three motorbikes and following the bullion van at a safe distance. Few minutes to the attack, the van made a turn at the Korle Bu Junction towards Jamestown.

The gang of six started trailing the white MON-TRAN vehicle shortly after it took off on Monday, June 14. The suspects were on three motorbikes, two on each. They followed the van for about two hours as it made stops around town to pick cash.

The bikers kept a distance of about 10 to 20 meters from the van and mixed up with other vehicles to avoid spooking the driver of the bullion van. They continued trailing the unsuspecting van as though they were ‘okada’ riders carrying pillion riders.

CCTV footages from the Bishop Bowers Junction around 11:52am on the day captured the van making a turn towards Accra. A little after 12:pm, the van made a turn at the Korle Bu Junction, went across the Korle Lagoon Bridge towards Jamestown.

At a traffic stop at Adedenkpo, the bullion van halted, and the first motorcycle went ahead of it. The others also followed, and eventually sandwiched the van at a crowded area. They shot sporadically at the van and into the crowd, killing the police escort on duty and a bystander. The motorcycles were seen moving at top speed from the scene as they continued shooting.

The police have since declined comment on the matter.

The MP is, however, urging residents to report suspicious events in their community to the police.

JoyNews/AdomNews · MP urges residents to report suspicious events in their community to the police.

“The way things are going, you cannot always depend on the institutional security agencies, be cautious of yourself and people should be sensitive to people around them. People should be ready to report unfamiliar faces around their vicinity. People should lookout for people who are wandering unnecessarily trespassing property and immediately report them to the police,” he said. 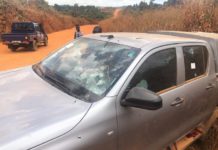