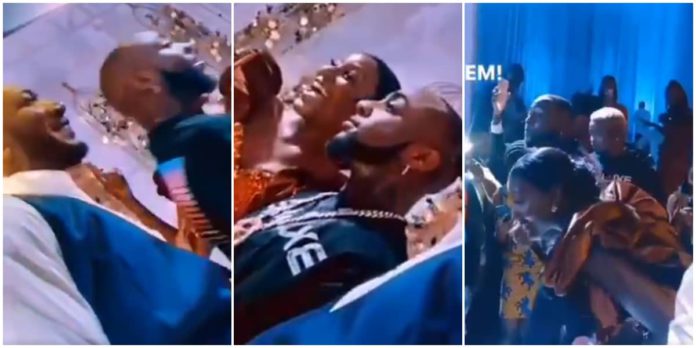 A Twitter user called Vinnie has shared videos from a wedding in Ghana that singer Davido reportedly crashed on Saturday, October 31.

According to Vinnie, the singer and the couple were lodged in the same hotel and he decided to perform for them at their beautiful ceremony for free.

In one of the videos, Davido was spotted singing his new single FEM as guests and the new couple dance and jump up in excitement.

The bride was dressed in a lovely brown dress and the groom donned a white shirt and sky blue jacket with a brown tie to match.

With the phones of guests raised in the air as they try to capture the beautiful moment, Davido made sure to entertain people with different hit songs.

The father of three sang his hit songs ‘Aye’ and ‘If’ before he left the venue of the wedding.

However, before the singer left the wedding, he made sure to snap some photos with the couple.

As expected, social media users had something to say about the singer’s kind gesture.