The Ministry of Tourism, Arts and Culture has donated some items to some veterans in the entertainment industry.

The donations, according to the sector Minister, Barbara Oteng Gyasi, is to ease the stress of some of these persons while they adhere to government’s lockdown directives.

Accompanied by members from the Film Producers Association of Ghana (FIPAG) and the Musician Union of Ghana (MUSIGA), the Minister paid courtesy calls on the leader of music group Wulomei, actress Grace Nortey, Grace Omaboe popularly known as Maame Dokono and Emmanuel Armah.

“I know that a lot of people in our industry have been affected but the resources to support everybody is also not available.

“So, the little that we have, we are using it to support the aged in the industry,” Mrs Oteng Gyasi told JoyNews’ Becky.

She explained that these veterans, unlike others, for some years have not been active and deserve all the help they can get.

Although the Ministry may not be able to provide for all affected members, Mrs Gyasi said they are working to ensure that members, at least, get some packages to sustain them during the fight against the coronavirus.

“There is a proper stimulus package which would be made available for the players in the industry to support their work,” she said.

Mrs Gyasi added that the Ministry is hoping the World Bank releases some money out of the $40 million aimed at a Tourism development project, to support players who have been affected by the outbreak. 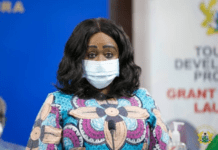