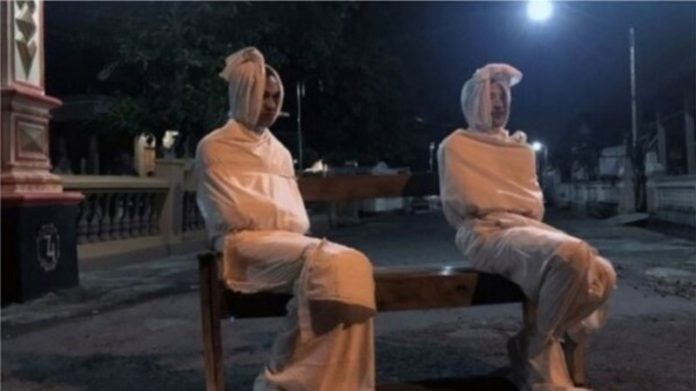 An Indonesian village, Kepuh, has been employing the help of ‘ghosts’ to force people to obey lockdown rules as a measure to deal with the spread of coronavirus.

The idea of the ghosts is taken from the village’s folklore which believes that they are souls that have not been able to transcend.

With the help of volunteers, several “apparitions” are stationed at strategic places in the Kepuch to check any form of gathering.

According to the media, the response to the desperate move was initially trivialised as people trooped out to see the performing ghosts.

A resident, however, said that things later improved as people started staying inside more, adding that they would not even come out for prayers.

“Since the pocong appeared, parents and children have not left their homes. And people will not gather or stay on the streets after evening prayers,” the resident said.

The idea was planned by the head of the village’s youth group, Anjar Pancaningtyas, in collaboration with local police.

“We wanted to be different and create a deterrent effect because pocong are spooky and scary,” head of the youth group said.

Pancaningtyas said that there is still a long way to go in educating the people on the need to avoid social gatherings as many villagers just want to live their normal life.