A statue to keep alive the memory and legacy of late former President Jerry John Rawlings has popped up online.

The statue is nothing short of excellence, as it clearly depicts the late statesman’s Afro hairstyle, sideburns and neat beard.

Though it is not immediately known where the artwork will be mounted, Ghanaians, who have chanced upon the work, cannot keep calm.

The sculptor, who has been identified as Samuel Kumi, took to his Instagram page to share the excellent piece of work.

Meanwhile, the late former President is set to be buried on January 27, 2021, but would be laid in state from January 24 to 26 at the foyer of the Accra International Conference Centre. 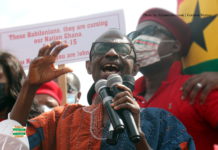 Check out statue made to keep Asiedu Nketia’s memory alive