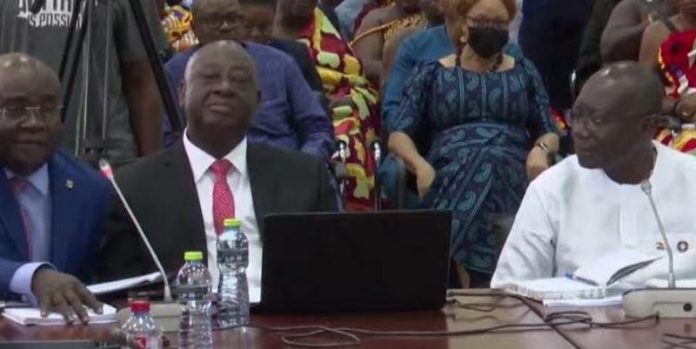 Under fire Finance Minister, Ken Ofori-Atta, has for the second time appeared before the parliamentary committee probing allegations against him but instead with a new legal team.

When he appeared before the committee last Tuesday, Mr Ofori-Atta was legally represented by Gabby Asare Otchere-Darko, a barrister called to the Ghana and English Bar and a managing partner of Africa Legal Associates.

The Finance Minister, who was clad in all white when he appeared before the committee on Friday, is facing a seven-point censure motion filed against him by the Minority in Parliament.

If the motion is successful, President Nana Addo Dankwa Akufo-Addo would have no choice than to dismiss his Finance Minister.

The Speaker of Parliament tasked an eight-member committee to probe the Minority’s allegations and has seven days to submit its report to the House for debate.

Economic hardship: I am truly sorry – Ken Ofori-Atta says as…