Nigerian Afrobeats star, Burna Boy, has tweeted his ‘last ever’ post and is leaving the social media app as he is “apparently too real for it.”

It is not clear who or what ticked off the musician, but it was a philosophical Burna Boy that announced the decision via two tweets on Wednesday.

“Find out what your true calling is in this world, train your mind and your body,” he posted.

Burna Boy had a Question and Answer session with his fans on Twitter on Tuesday, but it seems some of the questions about his sampling of songs by iconic Nigerian musician Fela Kuti irked him.

He also got into spats with fans over his perceived “arrogance” and seemed to deride another musician, Reekado Banks, who joined the session to challenge Burna to a music fest.

“You know I got too much love for you bro, but didn’t you see when I said worthy challenger,” he tweeted.

The response did not go down well with most people on the app, and he was slammed for his attitude.

It is not clear if the musician will be deleting the app or will hand over the control to his management, who have tweeted on his behalf in the past. 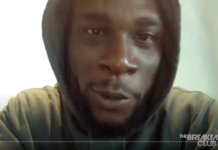 I betrayed you, forgive me – Papi of 5five fame begs...